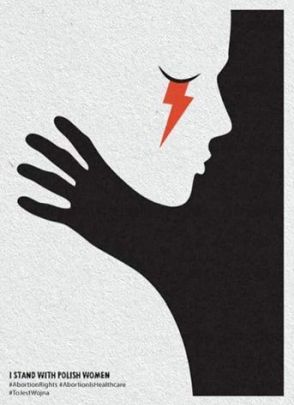 Solidarity greetings to the brave and militant women in Poland who are fighting for their rights.

The new abortion law is a severe setback for women’s rights and puts the health and lives of thousands of women at risk. That is why it is important that you continue to show a massive movement on the streets – despite Corona – how patriarchal and unjust such a law can be. Not only the state, but also the Catholic Church wants to exercise its power against women and their rights!

The women’s association Courage stands in solidarity with your struggle for self-determination. It does not matter for what reason women make their decision. They alone decide on actions in their own bodies.

With courage and strength, our Argentinian colleagues won the fight for the legalisation of abortion towards the end of December 2020. Until now, abortions were punishable by law – except after rape or if the pregnant woman’s health was at risk. The law that has now been passed allows for a time-limit solution: procedures are permitted up to the 14th week and are free of charge in the public health system. Argentina’s women’s movement has fought for this for thirty years.

This encourages women all over the world to fight persistently and even better organised for their self-determination and liberation and to stand up to right-wing governments and parties. Just as you are doing.

We stand by your side and wish you much perseverance and success.